Confused about whether a guy likes you or not? We ask relationship expert (and guy) Nick Bastion over at Vixendaily.com…

The truth is – it’s pretty obvious when a guy likes you. Guys are not subtle – he’s not going to drop “clues” or give you “hints” that he likes you. He’s going to do four very obvious things. And when you know what to look for, these things become even more obvious to spot. You’ll easily notice when a guy has feelings for you – or even when he has feelings for someone else…

So without further introduction, here are the biggest signs a guy likes you:

1. The first, most important, and most obvious sign a guy likes you is that he will spend time with you. The biggest reason that a guy starts to like a woman is that it feels good for him to be around her. He likes the feeling he gets when he’s around her – and he wants to get closer to her for that reason.

If a guy isn’t spending any time with you, or just never seems to be “around” you, then chances are he’s not interested. An interested guy is always going to find an excuse to spend time with you, and make the effort to be with you.

2. That leads into the second most obvious sign that a guy is into you: he’s going to make an effort to fit you into his life. That means that even if he’s busy, you’ll be on his list of priorities.Guys that flake, or make plans and break them, or just never seem to have free time to spend with you usually aren’t interested. But when a guy is contacting you first, making plans with you, and following through on them – he’s keen.

3. There’s a type of man who confuses women with his feelings more than any other, and that’s a guy who loves to flirt. This type of guy flirts with every woman he meets – it’s just his style. A lot of women meet a guy like that and think that he’s flirting with her because he likes her, only to become anxious, upset, and disappointed when he doesn’t give her any other indication that he likes her.

4. Finally, the last obvious sign that a guy likes you is that he pays attention when you’re having a conversation. Guys pay attention to the things that are important to them – and they remember afterwards. It’s why a guy can give you sports statistics from 10 years ago without being able to tell you his parents anniversary. So if he doesn’t remember the things you tell him, and doesn’t seem like he’s really listening or paying attention when you’re talking to him, that’s a big sign he’s not really into you.

Women often get confused when they don’t get these obvious signs that a guy likes them – and so they go on the hunt for  “secret”, “hidden” signs that he likes her. This can end up with her feeling awkward, anxious, and insecure around him – which could kill any attraction that he does have for her.

Vixendaily.com is the only site out there that specializes in mind-reading quizzes, content and advice tailored to your particular needs.  It’s like having your own personal mentor guiding you through life’s challenges every step of the way!

Founded by dating and relationship expert, Nick Bastion, who is the main contributor to the Love & Relationship Advice section of the site.

Are there any other obvious signs that a guys likes you? Er, keep it clean and tell us @Lovestruck

Is 5 the magic formula to long-lasting love? 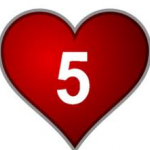 How many sexual partners is the perfect amount? According to new research looking into the key to lasting love, the number is five. The study, commissioned by MSN, revealed a...
Facebook Share
Email