Calling all Lovestruckers! Tired of suggesting dinner and drinks or Orange Wednesdays, again, and again? Lucky for you, we’ve scoured London for the best date ideas around, and what’s more, they’re not as ruinously expensive as you might imagine. 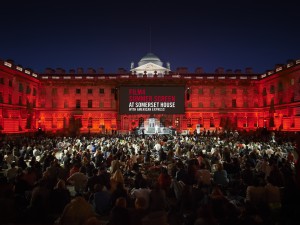 Suggest an evening cinema trip to neo-classical Somerset House. Nestled up against the river Thames, this is one of London’s most picturesque date destinations. Normally housing the Courtauld Galleries (and once home to the Inland Revenue), August sees the impressive granite building make room for a huge projection screen. This date-classic with a twist is sure to demonstrate your quirky and imaginative dating credentials.

You must have heard of this summer-staple by now. Each year Somerset House transforms its courtyard into an open-air cinema. Book very early to avoid disappointment. We suggest The Untouchables (Sunday 11 August). This 1987 film is a classic of good versus evil. The baddie being Al Capone (aka Robert DeNiro) and the goodies being Kevin Costner, Sean Connery and Andy Garcia. Perfect date viewing (NB. never suggest a slasher movie on a first date). Or, sticking with the theme of gangsters, albeit those of the more harmless and loveable type, try Bugsy Malone (Monday 12 August). This 1976 musical romp through the speakeasies of prohibition-era Chicago features an all child cast, starring Jodie Foster aged just 14. This was the same year that she received an Oscar nomination for Best Supporting Actress in Taxi Driver.

Somerset House, Strand, WC2. On a sunny evening, the river approach over Waterloo Bridge is a dreamy way to begin a date in London. Aim for Waterloo station (Jubilee, Northern & Bakerloo lines) and leave via exit 3 or 4, you’ll pass the Imax just before the bridge. But if it’s raining cats, dogs and small children then the nearest station is Temple (District & Circle lines). If this is the case, also remember to bring an umbrella, or double back towards the Imax…

£14.50 (plus booking fee). To cut costs, bring a picnic. Or, if you’ve arranged to eat somewhere afterwards, at least some popcorn. Nobody should be made to watch a film on an empty stomach.

Talking of eating, Somerset House has a lot of good food joints. But Michelin starred chef Tom Aikens has a bit of a monopoly here. There’s Tom’s Restaurant, Tom’s Deli and Tom’s Terrace. The latter offers sharing platters for under £30, views of the London Eye included. Bargain. But if you’re looking to escape the riverside breeze then wander up the Strand to One Aldwych. This impossibly fancy hotel (it has a swimming pool in the basement) has a lobby bar with a cocktail list to die for. They’re pretty pricey at around £9-15 but the waiters are incredibly friendly for central London and, more importantly, bring you complimentary nuts as fast as you can eat them.

During filming of The Untouchables, Robert DeNiro demanded that his costume include the type of silk underwear that Al Capone was known to wear. Ridicule his attention to detail as you see fit.

DON’T SAY ‘I think my favourite film is Carrie, you know, the scene at the end with the pig’s blood.’