A  new study has revealed that both men and women are more likely to cheat on their partners the more economically dependent they are on them. This challenges the belief that the main breadwinners in a relationship are more likely to be unfaithful.

Christin L. Munsch, who is an Assistant Professor of Sociology at the University of Connecticut said, “You would think that people wouldn’t want to ‘bite the hand that feeds them’ but surprisingly, that’s exactly what my research shows they do.”

‘This fits the age old view that men feel programmed to bring in the bacon so when they don’t, they feel their masculinity is threatened. For men, especially young men, the definition of dominant masculinity usually means sexual virility and conquest, particularly when it comes to multiple sexual partners. Cheating may be a way of re-establishing their threatened masculinity. Infidelity allows threatened men to distance themselves from, and perhaps punish their higher earning spouses.”

We often hear in the media about cheating husbands or partners who significantly out-earn their partner/wife (think celebrities, politicians and athletes) But the more common affairs of economically dependent men simply don’t garner the same media attention, so we don’t hear of this kind of infidelity. 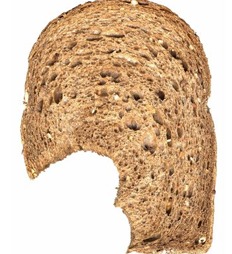 Interestingly, female breadwinners are more likely to stay loyal: For women, the more they “bread-win” the less likely they are to cheat, “Women who out-earn their husbands are least likely to be unfaithful when they make 100 percent of the couples’ total income. Interestingly, research finds these breadwinning women suffer from increased insomnia and anxiety and so engage in what sociologists call ‘deviance neutralization behaviours.’ Munsch said ‘these women will attempt to ‘big up’ their husbands’ masculinity’ with the aim of keeping a potentially strained relationships harmonious.”

Hmm, food for thought? It got our ‘loaf’ thinking!

What are your thoughts on this? Tell us @Lovestruck

Enjoy reading this blog? You may also like: Top 7 Relationship Wreckers