Hello. It’s us again, telling you where to woo your fellow Lovestruckers in London. After all, location is nine tenths of dating… Well, maybe not, but it’s up there with chemistry, personality, and the ever undefinable je ne sais quoi (in English: ‘I dunno, what d’you reckon?’) 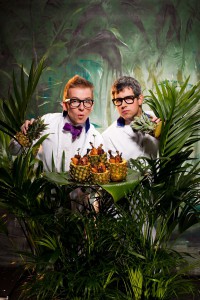 Summer in the city can prove a bit stifling, so we say escape down the District line to London’s biggest UNESCO World Heritage Site, The Royal Botanical Gardens at Kew. Although this leafy oasis is open all year round, Kew Gardens’ summer events are always worth waiting for and, with the unveiling of their ‘IncrEdibles’ season, 2013 has proved to be no exception. If nothing else, it’s worth the journey to visit the remarkable Palm House.

The premise? Incredible, edible flora and fauna. Look out for the Rose Garden Tea Room (a planter disguised as a trestle table set up for afternoon tea) and the huge kitchen garden. But the pièce de résistance has got to be Bompass & Parr’s Tutti Frutti Boating Lake. Think Willy Wonka lost at sea, rescued by Heston Blumenthal in a lifeboat made of fruit. Sail around the boating lake in 3D glasses, making sure to dock at Pineapple Island and the secret banana grotto. Far more exciting than any Hyde Park pedalo and ripe with date-talk topics.

Way out west in zone 3, but not as tricky to get to as you might imagine. Take the tube to Kew Gardens (District line) or hop on a train from Waterloo/Vauxhall to Kew Bridge station. The 5-minute walk over the Thames and past a perfectly kempt Kew green isn’t too much of a schlep.

Here’s the catch… Entry to the gardens is £16 for adults, and this doesn’t include the £4.50 it costs to rent a boat. If you know someone with a season pass then this is the time to call in a favour/rekindle your friendship, as members and their guests can waltz in for free (note that clutching this golden ticket doesn’t exempt you from the boating lake charge).

Head back onto Kew Road and stop for tea at the celebrated ‘Maids of Honour’. This restaurant and tea-room was opened all the way back in 1860 and is still famed for recreating Henry VIII’s favourite baked indulgence, custardy lemony tarts known as ‘maids of honour’ (hence the name of the ye-olde tea-room). Or, if Bompass & Parr have inspired the artiste in you, there’s the Kew Ceramics Café. All a bit too twee for a date? For a liquid lunch sans crème Chantilly, move things on to one of the many nice pubs dotted around the edge of Kew Green.

Sam Bompass and Harry Parr are, in their own words, jellymongers. Or, in the words of The New York Times, ‘England’s leading jelly artists.’ Not that there’s much competition for that title. The gelatinous duo, who, rather inspiringly, haven’t got a single year of formal culinary training between them, have been playing with their food since 2007. But it’s not just jelly they work with. Mention the 32-foot chocolate climbing wall they built at Alton Towers, or last weekend’s ‘Chromatopsia’, an event which saw them dye the River Lea an eerie fluorescent green to celebrate the one-year anniversary of the London Olympics. Crazy food stunts. Crazy guys.

DON’T SAY ‘Have they got a Meerkat enclosure?’

DO SAY (with a hint of irony) ‘It’s so nice to get out of the city. To be honest, I’ve always thought of Kew Gardens as the lungs of London.’