Our selfless pals at Bluffer’s have been locked in the love-lab firing up the Bunsen burners, dipping the Litmus, testing the pH and mixing up a dizzy concoction of love potions, hormones and pheromones. Their results are in. Sex ‘Struckers needing to know what’s going on beneath bonnet (whilst impressing dates and peers alike) read on now.

Dear friends, we give you ‘the science of sex…’

Hormones are remarkably clever chemicals which ooze into the bloodstream from a number of different glands. They can make the body do extraordinary things (aside from provoking pustular horrors on the faces of anguished teens, and turning the fairer sex into flaming, man-stomping demons every four weeks).

Because they are such subtle items, even the most biologically inclined ‘Strucker need not bother to take on board much about hormones other than to respect them as being mind-bogglingly complicated and ‘not fully understood’.

The coy term for sex drive, libido is something an expert lover will (purport to) possess in considerable quantities; in mere mortals it varies enormously – from person to person and from day to day, if not hour to hour. The cause of sex drive is unknown. Women are advised that physique and fitness are rarely determinants of sexual prowess in a man. Impotence is as common in builders, even bodybuilders, as it is in bankers. Though the latter often have a notable supply of testosterone, they are still not immune to ‘banker’s droop’ (limpness deriving from falling markets rather than sinking bottles of champagne). 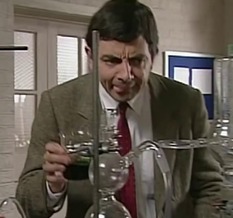 These are one of the better discoveries of the twentieth century, and can be harnessed to telling effect when recounting, for example, the time when you experienced that coup de foudre after merely scenting the back of a neck. The theory is that all mammals secrete tiny amounts which magnetically incense the opposite sex in a natural ‘Lynx Effect’.

In the brief period since their ‘discovery’, these little chaps have been held responsible, rightly or wrongly, for sexual attractiveness, success at interviews, maintaining true love, goading tribal behaviour (such as football violence) and many other mysteries of the modern age.

Note that the plural is now in common usage. When a man or woman performing a sexual act gets so far into the experience that their tubes go into an involuntary series of minor muscular spasms and the brain follows up with a sensation anywhere from OK to exsanguinated, the whole package is called orgasm.

It has been likened to 10 sneezes happening all at once – which might be seen as a rather unpleasant experience (for both parties). A better and more traditional analogy might be the feeling of pure, boundless joy felt when the in-laws leave after Christmas.

Male orgasms are almost invariably accompanied by ejaculation. They vary in intensity but probably not in type.

Female orgasms are said to come in many different patterns and consist of three distinct types – the clitoral (high-pitched, surface, buzzing fun), the vaginal (growling, deep, full-body roller-coaster fun) and the multiple (fun so good I’ll be able to tell you about it on Tuesday, when I regain the power of speech).

Female orgasms normally fall into one of the following categories:

Do you have any further fascinating scientific sex facts? Tell us @lovestruck