It might be all well and good settling on the perfect outfit and fine-tuning your anecdote about seeing little Daniel Radcliffe strip off in Equus, but if you’ve arranged to meet at the London Dungeons then no amount of wit and charm will secure that sought-after second date. 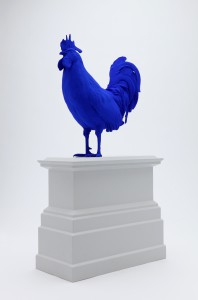 The Fourth Plinth in Trafalgar Square, on a nice day preferably. German-born Katharina Fritsch is the latest artist to display her artwork on the 172-year-old plinth. The sculpture is set to be a 4.3m bright blue fibreglass cockerel. So go and see if it’s anything to crow about.

Trafalgar Square is cornered by four plinths, each meant to house a statue. But due to insufficient funding the fourth one was left waiting for its sculpture for 150 odd years. In 1998 the RCA said ‘Enough is enough!’ and stuck a Mark Wallinger sculpture of Jesus Christ on top of the famous pigeon-spattered plinth. The Fourth Plinth Programme, begun in 2005, is a continuation of this public art initiative. Each work is displayed for a year or so and attracts hordes of visitors – talk about good exposure, it’s almost as coveted as a retweet from Stephen Fry. You might remember Anthony Gormley’s 2009 commission: he invited members of the public to stand on the plinth for one hour intervals. 2,400 people were allowed to grace the stony surface, some more clothed than others – there’s always one.

Wait for it…Trafalgar Square, WC1N. Charing Cross tube station being the closest (but Embankment and Leicester Square are also a stone’s throw away). And it’s the north west plinth (that’s top left, if you’re facing the National Gallery).

Free! We know, we know, that’s not a word you hear very often these days.

Weather permitting, St James’s Park is just down the road (about a five minute walk). Bring a picnic hamper and a rug for guaranteed al fresco success. Admire the resident pelicans, and feed the ducks (don’t worry, the pigeons don’t venture this far). Trust us, this classic date-activity is a cliché for a reason. But if the British summer has returned to normal (ie. bucketing it down at every inopportune moment) then head to Inn the Park. This little café-come-restaurant has an unrivalled view of the lake and its two little islands and serves up antipasti and aperitifs (just steel your nerves for the usual waterside mark-up…).

Some people, namely the appropriately named Thorney Island Society, took issue with this latest commission for the plinth. They claimed that the bright blue sculpture would be a ‘feeble distraction’ and a mockery to the memory of Nelson (the guy atop the really tall plinth in the middle of the square). Still confused? To cut a long story short: the cockerel is the symbol of France and Trafalgar Square commemorates England’s victory over France at the Battle of Trafalgar in 1805, which means the two are at cross-purposes rather. Sacre Bleu! But the statue was nonetheless approved for display, and will be roosting in the north west corner of the tourist-hub until 2015. And let’s face it, it’s not as if there aren’t enough lions on hand to deal with the cockerel if it gets cocky.

DO SAY ‘Wow, Fritsch has really thrown the cockerel among the pigeons.’

DON’T ASK ‘Hold the picnic hamper for a moment, would you? I think a pigeon just defecated on my head.’